On March 10, 2011 our branch received a proclamation from Kevin Davis, St Tammany President, acknowledging AAUW Covington-Mandeville as part of the “90th Anniversary Celebration of right to vote for American Women”.

Photo shows the president at the time, Jean Lotz, receiving the proclamation at this St Tammany wide event 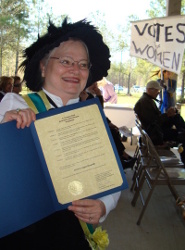 The following photos show members dressed in costume for the 90th Anniversary event. 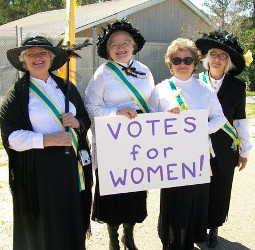 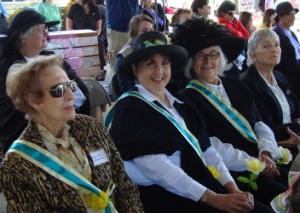 Star Status – 7 Stars!
(this award has been discontinued by AAUW)

Over the past several years we diligently increased our achievements toward the ultimate “Seven Star” status. In 2000-2001, our branch was awarded “Seven Stars” for membership growth of 14% and branch activity in public policy, leadership, fund-raising, social justice, community action and visibility.

In the past, members have been designated as Named Gift Honorees with a branch donation of $500 to the AAUW Educational Foundation (EF). Named gifts acknowledge a member’s service to the branch or were donations made in memoriam. Our branch AAUW educational donations are currently directed to an AAUW Educational Endowment Fund honoring the Women of Louisiana.

The EVE award was presented to a non-board member for outstanding contributions to the Covington-Mandeville Branch. The award winners are generally presented with an apple related gift at the branch annual meeting in May.